I don’t know what the first e-learning program that I ever took is at this point, but I remember being pretty skeptical.

How could it replace the live interaction that I remember so well from my formal schooling?

My first real exposure came a bit late… when I was accepted to teach at the Bachelors and Masters levels at the University of Phoenix’s business school.  That is, their ONLINE business school.

I probably should have resolved my skepticism before applying, but the truth is… I didn’t.  I somehow expected it not to work, but I was curious, and I thought that “I have nothing to lose!”

What interested me from the beginning was the requirement that one actually had to take a programme online before being placed in the first class.  It was a non-graded course, but a certain minimum standard was required in order to be given the first class.

I signed up, and it started, and my eyes were instantly opened.

The four week programme that I took – a kind of train-the-professor course – did indeed deliver on its promise. As I completed the programme, working with a team I noticed that I was developing a strange kind of emotional bond with everyone in the class, especially when tough topics were being discussed.

It was hard not to be engaged.

All doubts that I had vanished in a very short space of time,as actually did effectively learn to teach university coursework to students that I would never, ever meet.  In other words, the learning outcome was achieved.

Five years later when I retired from teaching online I did so after learning something about my own degree programmes back in the 1980’s.  I discovered that I had been the one teaching myself all along, a fact that had been obscured by the presence of live lectures, professors and TA’s.

This all helped when I decided to design and teach my own programme, even though doing so was the furthest thing from my mind when I started blogging about time management back in 2006.

Back then, I had a few active blogs, and now and again I would bemoan the fact that I couldn’t get any help  in resolving the issues I was having managing my time while living in Jamaica.  I started writing a post here and there in my company blog in particular, and as my interest grew I created a new blog to focus on the topic of time management exclusively.

Along the way, it dawned on me that I actually had enough new content to deliver a unique time management programme, not only live, but also online.

That little thought, so innocently entertained, has pushed me to become an innovator of sorts, which certainly was not the idea I had in mind when I started griping and writing about life in Jamaica.  I had to learn what it takes to not only design good courses, but also also how to become competent at e-commerce.

I know from reading the popular press that there is a fantastic notion that with e-learning one can sit on the beach on the perfect beach here in Jamaica and teach people from around the world.  From experience I can say – “It ain’t that easy” and I would have abandoned the effort years ago if I didn’t happen to love two things:  time management, and also practical, new technology.

It took quite some time, and a lot of trial and error, but I did figure out how to:

I have not made a great deal of money at this, but my initial goal was to replace the income I was making by teaching courses at the University of Phoenix.  This I have done, and now, instead of being paid a salary, I am working for myself, with a unique product that I own entirely.

That gives me a good feeling, and makes me think that the hard work to learn a host of tools, techniques and skills has actually been worth it. That is, until the next glitch comes along (as they so often do) that keeps me up late at night struggling to find a solution!

Now I’m on to the next challenge, which is to convert my programme:  MyTimeDesign 2.0.Professional, into a version that any company can use in an online, company learning environment open only to its employees.  I’m thinking of calling it “MyTimeDesign 2.0.Corporate.”

I wish I could say that the idea was mine.  Last week a member of the CaribHRForum discussion list sent me email asking me how much I was charging a company to offer MyTimeDesign to its employees.

I had no idea — (and I still don’t) — as I never seriously contemplated a company making that kind of request.  I checked around the internet to see what others are charging, and I still can’t find an online corporate programme in time management that compares to MyTimeDesign.

So… as I’ve had to do many times on this particular journey, I am returning to the drawing board with little or no guidance, and more questions and answers. 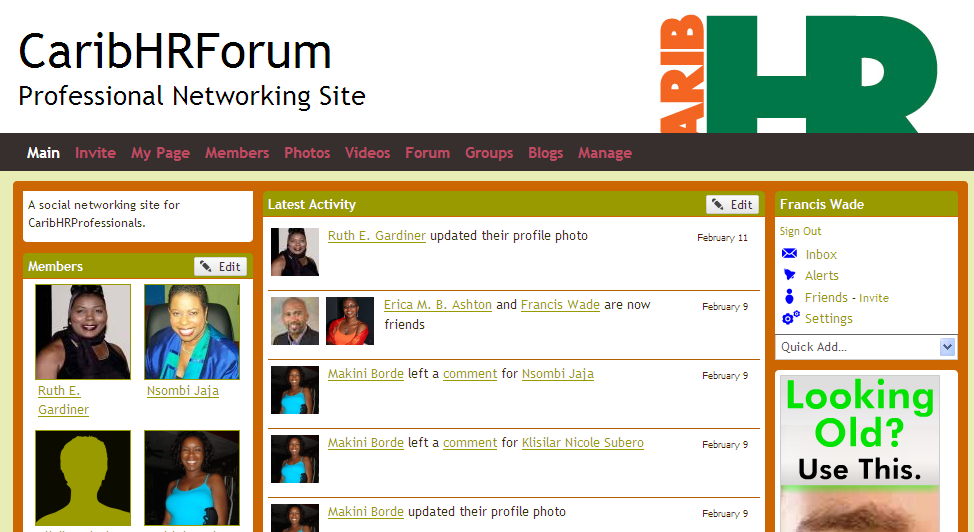 CaribHRForum is pleased to announce the formation of its Professional Networking Group.

Based on social networking software, the group allows members of the forum to get to know each other, while escaping the anonymity of the CaribHRForum discussion list.

The initial group was formed from the member of the discussion list, which is 420 strong at this point, and attracted over 120 members.

At the moment, membership is closed, but when it reopens there will be a small charge for all new members, payable on an annual basis.

The plan is that the discussion list will always be free, however.