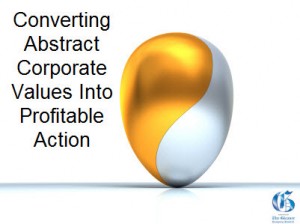 Recently, I took on the topic of values in a Gleaner column. It’s one that many companies have a problem with, even after spending time and money on developing the “perfect” solution.

You are sitting in your CEO’s office and she wants to know why the list of company values isn’t working. After all, she complains, “We spent two days at last year’s retreat coming up with it. Everyone was involved, so buy-in was never an issue. Why then has nothing changed?”

As a manager or executive, you are caught off-guard. You see the values plastered on walls all around the office. Each person carries a little laminated card in his/her purse or wallet. Why are they not working?

What you may fail to realize is that engaging employees is only a small (but necessary) start. To go further, you need to shed a particular mental model that is limiting your company’s success.

It all starts with a mistaken assumption. In companies, people assume that when it comes to understanding corporate values, everyone is on the same page.

The facts say otherwise. When leaders speak about values they often use them as “valence issues”: non-controversial topics that cannot be argued with, such as “Integrity” and “Respect.” They are a favorite tool of politicians who rely on the technique to get all heads nodding: even those of their opponents.

However, a deeper dive reveals the truth. Executives have a habit of turning values into valence issues, causing them to fall flat.

The best way to convert abstract values into profitable action is to translate them into norms – a step most companies don’t take. For example, one employee may interpret the value “We Put People First” as a suggestion to say “Hello” to each person they pass every morning. Another might see the act of greeting people they don’t know (or like) as one of insincerity and disrespect.

In other words, both employees might believe that they are being true to the value, while acting in opposing ways.

The chances are high that in your company, the values that you promote so stridently are causing opposite effects. They end up creating discord, burning up energy and wasting motion that distracts from the bottom line. What can your executives do to make sure that your investment in the retreat isn’t frittered away?

1. Learn the Video-Tape Test
To solve the problem of poor coordination, focus on defining behaviours that can only be observed with the naked eye, and be recorded on video. That is, they need to be the kind of actions anyone can see. For example, the act of “prioritizing” fails the test. By contrast, “writing up a prioritized list of potential tasks” passes. When this distinction is clear, new behaviours become easy to learn and understand because they can be passed on by the average worker.

2. De-construct Values into Behaviours
With the video-tape test in mind, you can break down any corporate value into its component behaviours. Just set up an executive brainstorming session, explain the distinction, and ask for examples of behaviours. Keep going until you have a list that meets the criteria.

As you take this step, go for extra credit: craft new behaviours that represent an evolution of your company culture. Start with what people do today, and then improve it by several steps. Also, don’t be generic… instead, look for fresh language that shouts: “Here is something you don’t already know.” This helps you avoid valence issues.

3. Convert Each Behaviour into a Performance Matrix
It’s tempting (and a mistake) to believe that someone is either demonstrating a particular behaviour in full, or not at all. A better alternative is to think in terms of a continuum of performance ranging from “novice” to “expert”.

For example, if the chosen behaviour happens to be “Greet colleagues each morning,” a novice, who is new to the company, might struggle to remember to enact the practice. However, an “expert” who has been around for some time would already have converted the behaviour into an automatic habit that never fails.

With such a matrix of behaviours, it’s much easier to evaluate oneself, a boss, direct reports and one’s peers. Now, you have an objective baseline that serves as a starting point. Build on it by creating a personal improvement plan that helps guide you through simple new practices, a few at a time. Ensure that you aren’t trying to change too many things at the same time, and build a support system just in case your willpower flags.

Before long, the entire organization will be moving in the direction of the retreat’s values because there will be an alignment of key behaviours. Your company will be far more likely to see an all-important impact on the bottom-line.

Francis Wade is the author of Perfect Time-Based Productivity and a management consultant. To receive a free Summary of each of his past articles, and updates, send email to [email protected]