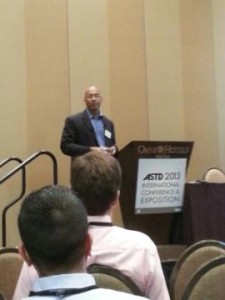 Back in 2002 I attended the American Society of Training and Development’s International Conference and Exposition (ASTD ICE) in New Orleans. It was an eye-opening event in many ways, and I vowed to return some day: not merely to walk the floor as an attendee, but to make an actual presentation.

It didn’t happen right away!

It took a few years to develop a unique message around my area of interest – time management. It took another few years to have my first proposal accepted, after numerous rejections.

The trip to the ASTD Conference in May of 2013 came right after attending the HRMATT Conference in Port of Spain. I spent only a day at home in Kingston before flying out once again to Miami and then Dallas. I met one Jamaican who flew up from home – ROwanne – and a single Trini. We appeared to be the only ones straight from the Caribbean in attendance.

What did I learn from attending, and from speaking?

1. There are some big trends underway in mobile learning

a lot of focus on mobile devices as learning platforms. Many of the speakers and the companies at the Expo focused on this opportunity which made sense due to the number of high-powered devices people were using, especially during presentations.

2. There were lots of LMS’ on sale

One thing that hadn’t changed: there were still a lot of companies selling Learning Management Systems (LMS). These high-powered software platforms come at awesome prices, and promise 24-7 tracking and programming for training and development managers. Unfortunately, there isn’t a single Caribbean-based company that uses an LMS that I know of.

There are less expensive alternatives available, from what I can see.

While Caribbean companies struggle with the concept of e-Learning, and most regional training professionals haven’t taken their first e-learning programme, at ASTD there was simply no question about its essential role. Instead, the questions have evolved: what platform should we use, how should it be designed, who should do the design. I was happy to see that the platforms I use for e-Learning were well-represented, and I got a few new ideas, but nothing earth-shattering in terms of new technology has emerged. Not yet.

With 9000 people attending and 24 parallel tracks in any timeslot, plus hundreds of exhibitors… it was a lot to take in. Too much to even attempt to see and do everything! I had to take the advice, often given by the experienced, that slowing down and pacing are important survival skills.

I met a number of people from countries all over the world and it felt wonderful to be a member of such a great, global community. Thanks goodness for the Internet, I kept thinking. I actually felt closer to the newest trends in the industry than I did when I attended in 2002, even though I now live in the Caribbean. That’s only because the Internet has levelled the playing field and it’s not necessary to attend a physical event in order to stay entirely abreast of the latest developments. Plus, our proximity to the US and lack of a language barrier all work in our favour.

1. The shock of seeing an audience

After attending a few poorly attended sessions before my own presentation, I was surprised to see 150-180 people seated at 2:15pm on Monday, willing to hear what I had to say. I credit that to the luck of the draw in part, as my topic was numbered M200 – which placed it at the very top of the agenda of the 24 sessions scheduled for the hour. Also, there were very few sessions that addressed anything related to my topics – behaviour change and time management. “How to Stop Failing at Behavior Change Training – The Case of Time Management.”

As a trainer, I found the group of attendees to be quite responsive. When I canvassed the room during my talk, some 90% of the audience were trainers, and only a handful were Training and Development Managers. As a result, they were tightly clued in to what I was saying, and easy to engage. I felt as if they wanted me to succeed – always a good thing! There were a few nodding off – those I always notice, and I tried the old trick of walking close enough for them to wake up. It worked well enough…

3. Heads Down in Devices

If you are a trainer you probably know what it’s like to see increasing numbers of distracted learners in the past few years. Well, if the ASTD conference is any indication, you can expect that to increase. I’d guess that 95% of the audience had a mobile device, and that 75% of them used it at least once. I got “lucky,” however. Wi-Fi wasn’t working… which led to some complaints in the feedback on the session. If you are a Twitter user, you might like to know that I took a tip from another session and set up a backchannel – #m200 – which I pre-loaded with tweets set for the time of my presentation. Due to the lack of Wi-Fi it was used only by the hardy users who stuck with it.

At the end, I gave away a free signed book and was a bit surprised at the rush to drop cards in my box. It was proof – people love games of chance and competitions. I only regret not having more after-speech learning opportunities set up with mobile access.

5. Stuff I Wish Had Gone Differently

I could have offered (and can still offer) SO much more after-class mobile resources, now that I have learned its importance. Today, in fact, I set up the first after-class mobile app for my NewHabits time management training. It should be up and running for my next class in July.

In the two days I was there I only sold 2 books. I learned why after touring the book store, which was stocked with books on how to do specific types of training. My book ended up in the general business section, and I had to ship them back home just as people were starting to do their shopping on the last day. Oops!

ASDT 2014 will be in Washington DC and I simply can’t wait for next year. This trip and all that it included was a high point, and I am eager to repeat the experience as a presenter. I can’t recommend it all highly enough. Let me know if you are planning to go!